Post #67: The lockdown has gone from a mistake to a crime by Dennis Prager, drilled down on by yours truly

The lockdown has gone from a mistake to a crime by Dennis Prager, drilled down on by yours truly (below)

A considerable portion of what Mr. Prager so accurately and piercingly dissects and laments I have published on 10 different times in either video, interview, or post format since March 21st, 2020.  The first content related to the Corona virus policy response debacle was a video titled “Is the cure was worse than the disease?”  For anyone that listened, there was little doubt what the answer was.

I long ago stated that the small business bankrupting lockdowns were tantamount to the biggest crimes ever perpetrated on Main Street economically (if this isn’t a 5th Amendment, Takings Clause violation of the highest order, I don’t know what is) and in terms of a catastrophic loss of freedom (a mockery has been made of the 1st Amendment).

In fact, too much of our local, state, and federal Corona virus policy response and the ever-shifting CDC “guidelines” continue to constitute some of the most hugely disenfranchising tyranny and disinformation campaigns ever “cooked up.“  In the interim, they’ve been “served up” multiple times a day, for some five months, by our Pravda press, which has been in cahoots with leftist politicians, bureaucrats, and K Street crony capitalists all too happy to join in the Covidocracy (George Gilder’s brilliant term) as they get bailed out, … and their Main Street competition wilts.  I collectively call these fascist crooks “the Coronacrats.”

Based on the insanely destructive Corona virus policy response fallout (charts 1 – 3) pretty much the world over, you’d think that 20% of the world’s population was threatened with eradication by this virus, when in actuality 0.01% of the global population has perished.  In the US, that percentage is approximately 0.05%.  However, the US percentage would likely be astoundingly lower if it wasn’t for financial, regulatory, and political (anything to get rid of the “Orange Man” threatening to eventually drain the swamp) incentives to blame the virus for as many deaths as possible.  And that isn’t conspiracy theory.  Belatedly, straight from the CDC horse’s mouth just a few days ago, namely on August 26th, 2020, came the following comorbidity information, a tacit confirmation of tremendously overstated Corona virus (COVID-19) deaths:

If only we were all Swedes

Clearly, the world should have followed in Sweden’s footsteps, a country that could not afford to print or avail itself of ECB-printed euros to offset laying its economy and freedom to waste; a country whose healthcare regulators believed in traditional isolation for those most at risk; a country whose decision makers took their cue from historical pandemic evolution, specifically that a virus can’t be broadly isolated, and that if the virus spreads among the young and healthy, nature’s “herd immunity” will put it down sooner rather than later, at minimal overall cost in terms economic destruction, job losses, social upheaval, and lives lost: 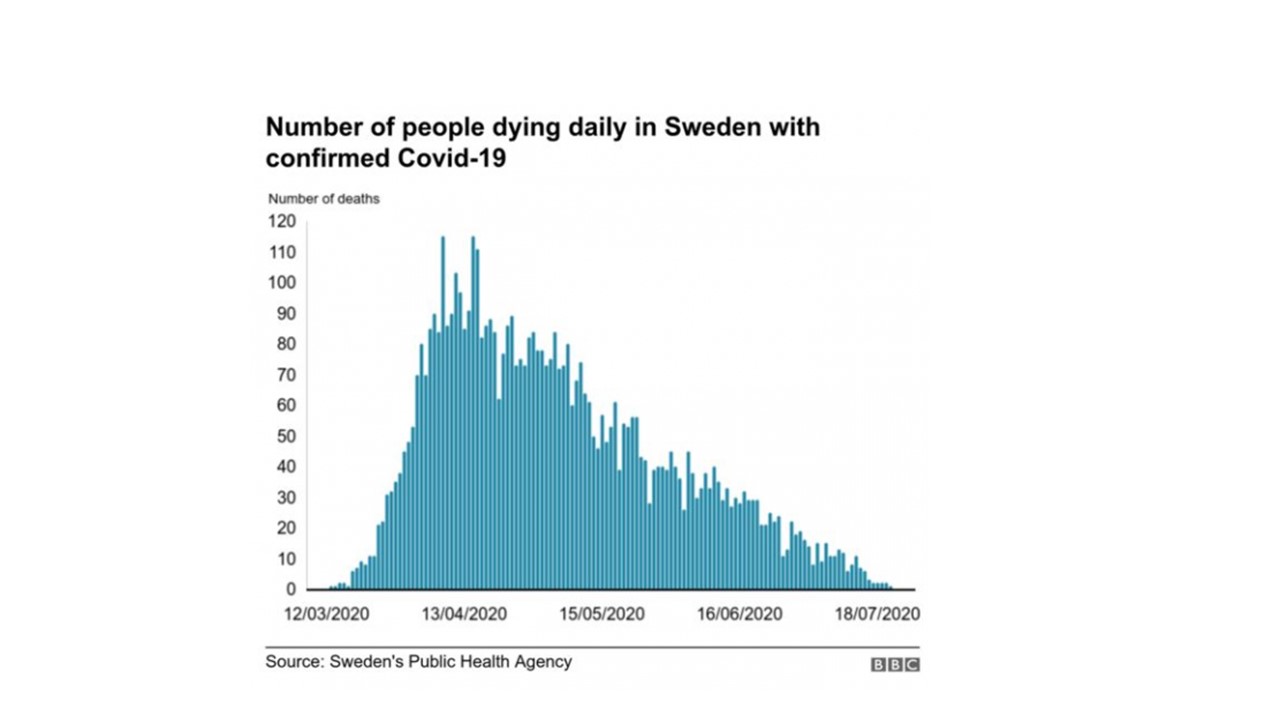 Amazing, what sheeple (way too many) Americans have become, for they have fallen for the “Black Death, revisited” scare mongering hook, line, and sinker — modern day pandemic reflection, the fact that there aren’t 7.8bn humans by accident, confidence in our immune system’s capacity to put down viruses, rapidly declining Corona virus deaths (the backside of that virus bell curve), and ever more facts slicing through the MSM virus fog of deception be damned: 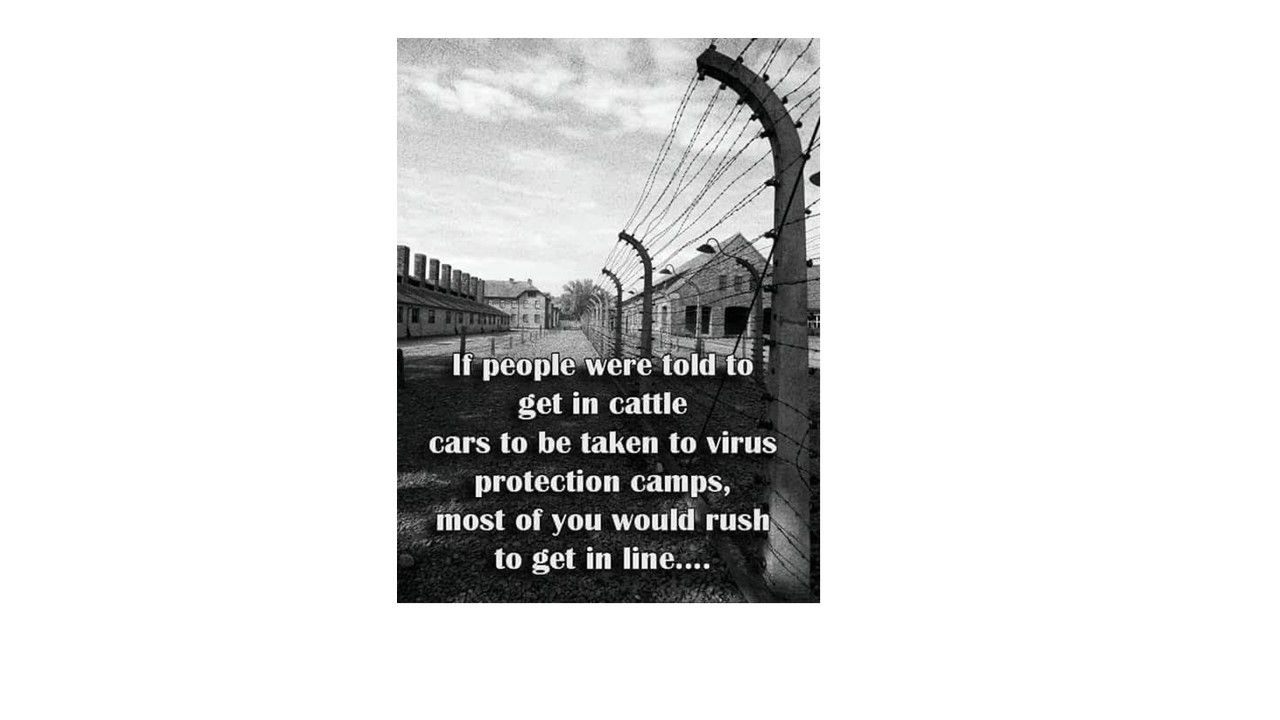 Here, in red state Florida, where Corona virus deaths (prior to the “comorbidity recalibration”) amount to but 0.03% of the Florida resident population and are increasingly flat-lining, kids that virtually never succumb to the virus, and are highly unlikely spreaders, are being forced to wear masks all day at school!  Stores have big entrance door signs telling you that you can’t come in without masks on (I went in four stores yesterday without a mask, and I was able to keep it off in three, but boy did I get stares).  And, believe it or not, there are some fools out and about in 96 degree heat riding their bikes, doing yard work, and doing construction work with masks on.  There are even those “maskerating” in black pavement hot strip center parking lots going to their cars with grocery carts, as I was told was the case prior to returning to Southwest Florida from Switzerland on August 22nd.  Some shoppers even keep their masks on when they drive off!  You can’t make this stuff up.  GOOD GRIEF!

A hoped for awakening

May enough people comprehend and resist this despotic, malignant folly by politely rejecting the lockdowns, social distancing, and mask insanity that are imposed on virtually all social and business activity in varying degrees, from churches to vet hospitals to McDonald’s to airlines:

Alaska Airlines upholds the prevailing prevarication that “wearing face coverings significantly reduces transmission of the COVID-19 virus.” To a virus thousands of times smaller than the mesh of a mask, a cloth appears like an immense lattice of large and completely open windows and doors.

Its chief effects are to make politicians and pettifogs feel important and citizens feel ignominious. The cloth confines larger bacteria, aerosols, and sputum near receptive surfaces, such as your eyes, nose, and mouth and thus cultivates both mental and physical disease.

A punctilious study by Swiss researchers pored through dozens of peer-reviewed analyses on the impact of masks and found no significant benefits and several downsides.

After all, if Speaker Nancy Pelosi considers masks beneath her dignity when she visits her hair dresser, or if Governor Gretchen Whitmer’s husband can attempt to move to the front of the boat launch line (to get his boat out on to the water while others are backed up due to executive order lockdowns), why should “we the people” comply with liberty and commerce (Constitution) eviscerating diktats?  This is all the more true given that such decrees have thrown millions upon millions of Americans out of work and into emotional and financial desperation, including the prospect of between 30m – 40m Americans getting evicted prior to year’s end!

There are 330m of us in America, and there are “only” about 24m of “them” at all governmental levels throughout the country.  Even if only a quarter all the American sheeple, or 83m (mostly) citizens, again become free people, there would be no way that the bureaucrats that would get involved could stop a non-compliance (with unconstitutional diktats) mass movement – and neither could their big-cap crony handmaidens.  Why?  Because they wouldn’t be able to turn so many of us away at the WalMarts, the CVSs, the Home Depots, etc. without cratering their P&Ls.*

It is time to just say NO.  Or at least give it a whirl!  Care to join me in a grassroots effort, one person at at time, to halt and then reverse the single largest public policy response blunder in the modern (post-WWII) era?  A criminal blunder which threatens to cast a very long shadow on our already heavily misallocated, hugely indebted, counterfeit currency world (chart 24) — a world which was already set to “crash and burn.”  But instead of the Corona virus policy response constituting the straw that broke the camel’s back, the response is more akin to a bridge falling on the camel!

*- Plus, the Deltas of the world would again have a chance of recovering from a 94% drop in passenger revenues in Q2:2020 without the taxpayer funding a load factor (capacity utilization) ceiling that would still leave them spewing billions of dollars of red ink.  In plain English, a heavily downsized Delta would actually have a chance of surviving.  We will be paying much higher fares soon enough, but at least we’ll still be able to fly someplace.  Of course the entire airline industry could declare bankruptcy and thereby shed its liabilities, but the industry’s liabilities are creditor assets, and heaven knows we’ve got enough underfunded pension plans that don’t necessarily want to own jets parked in Arizona that won’t earn them a dime.  After all, many airlines have already used the tax deductible nature of interest expense coupled with artificially low interest rates to leverage the crap out of their high operating leverage, incredibly capital intensive businesses’ balance sheets to enrich the industry’s C-Suite; it would be a shame if the same top brass could now add insult to injury by stiffing the very creditors that (foolishly, granted, but tell Grandma about that) enabled them to do de facto LBOs in order to recklessly goose EPS and share prices.   Screwing both taxpayers and creditors is a bit rich, don’t you think?

P.S. — I don’t quite know how to best communicate this, but it is entirely probable that a bright, well-read, gutsy civil engineer that a) knows a lot about local cronyism, b) happens to live in SW Florida, and c) wants to fight against the complete evisceration of liberty, sound money, and the unparalleled US Constitution may chime in now and then with posts of her own on this site — right, Debi?  If this is an awkward introduction, revisited, please forgive me, readers and Debi alike!