The road to serfdom

Below please find my “edited for post presentation” comments to Greg Hunter’s interview with Dr. Paul Graig Roberts, which was made available on youtube on April 14th.

Thanks, Greg, for the interview.  Frankly, I’m amazed by Dr. Paul Graig Roberts’ nationalization/debt forgiveness recipe as the only cure.  When has nationalization of an economy anywhere in the world ever led to a good outcome for the majority of the people, be it in terms of freedom or economic prosperity?  How can he de facto be willing to entrust the same lawless big wig scoundrels that are never committed of any crime or do any time to suddenly “grow a conscience” or to do what’s right for the supposed true sovereigns, the people.  How naive is that?  The bigger the government gets, the less constitutional it is, and the more cronyism and redistributionism and money printing there is.  This is the opposite of letting the “system clear.”  It is also at odds with human nature, free market incentives, the Invisible Hand of Adam Smith, enterprise, and thrift, the collective backbones of a wealthy and free society.

It also known as socialism, be it the fascist or the communist variety.  Socialism IS the road to serfdom for vast majority of the population!  Therefore, Roberts’  authoritarian recipe to finish off the little constitutional fidelity that’s left and to print the money to bail out the very corporations that he correctly said bought back stock, leveraged their balance sheets, and went overseas to produce is both inconsistent and conducive to yet more moral hazard.  And, if we really want to bring companies back to America, let’s clean up our own backyard first, starting with massive reform of the very litigation and regulatory insanity that has long pushed lots of companies overseas in the first place!

Staying in the private sector that needs to be bailed out ….  After Roberts’ recommended bailout of citizens via, I suppose, the Fed buying all the private household debt that can’t be serviced just like all the corporate debt that can’t be serviced (Wall Street always gets bailed out by the Fed taking junk bonds off its hands at way above market prices if the Treasury/the taxpayer doesn’t do it such as with TARP), is work incentive-killing, supply-withering, unaffordable universal basic income next?   I ask this because you can’t issue a “nationalist, Constitution-finishing edict” that states that all the off-shored jobs and factories “have to come home” and expect a viable system of thousands of components suppliers to suddenly reappear “overnight” after decades of outsourcing!

And what will that universal basic income buy if the currency being issued hugely exceeds real GDP growth and becomes increasingly worthless thanks to even more money printing as foreigners ditch the dollar and the Fed’s balance sheet expands even more as it “soaks up dollars coming home” because no one else will?   Plus,  what happens to hurting creditors, very much including pension funds invested in bonds (about 40% of allocations) when, on top of a decade plus of yield deprivation run for the benefit of debtors, their bonds are suddenly worth only “50 cents on the dollar?”   Is this not massively doubling down on moral hazard?  And aren’t the real suckers the people that lived frugally, the companies that didn’t binge on debt but instead invested in organic growth, and the states that have managed their finances relatively well?  Is this the right signal to send to those that tried to do the right thing, financially and economically?  Hello!

Moreover, on the heels of such a debt jubilee or Fed assumption of non-performing/junk debt, what will the cost of money be, i.e., after the SAVERS/creditors get screwed royally, again very much including Main Street’s pension asset owners?  How much pension income will they have on the heels of such a “jubilee” with which to buy anything?  Instead of just having to sell their bonds and stocks because there are no coupons or dividends worth a damn, they won’t even be able to “burn their furniture to stay warm!”

Which creditor, with his suddenly “50% lower net worth,” will again lend money at 1%, 2%, or 3% after that, much less have any funds left to lend?   How is this supposed to help encourage the very savings that will be necessary to rebuild America’s manufacturing might, which will take decades to fully accomplish, just as it took decades to lose (think Apple’s Jobs, who said he couldn’t do “relocalization” of Apple’s nearly exlusive Chinese/Asian manufacturing if he wanted to, because the manufacturing skills and the expansive requisite supplier base is nowhere to be found in America!).

Roberts’ “solution” is irrationality, much like continuing to bail out Wall Street and K Street cronies is counterproductive theft, i.e., highly destructive folly for 99% of Americans!  Plus, it is also about as far removed from the very Constitution (clearly LIMITED and delineated government powers, separation of powers, sound money, federalism, extensive property right protections) that brought the country the greatest wealth and individual freedom ever known to mankind, which all happened prior to the creation of the Federal Reserve in 1913 and prior to the disastrous 16th Amendment (federal income tax) and the anti-federalism 17th Amendment (election of federal senators through direct votes instead of via state governments), all of which conspired to fuel a growing central government leviathan doing the bidding of the elites in DC (elected officials, un-elected bureaucrats numbering over 2m, and their crony pals on K Street and Wall Street) as enabled by counterfeit currency/the printing press.

That same “toxic public policy stew” has given us $1.9trn in annual regulatory compliance costs and litigation costs as a percentage of GDP that exceed Europe’s by a factor of nearly 3:1!  All this has stymied the majority of Main Street entrepreneurs, who have long had to make extortionist payments to regulators instead of investing in organic growth, who have long been afraid to bring new products to market because of litigation fears, and who have long been prevented from expanding the payrolls or the salaries, as that money instead went to statist bureaucrats and their crony hangers on.   Who wants more of this “business model” via nationalizing capital markets, nationalizing corporations, and nationalizing individual finances and income?  Really?

Moreover, if Roberts is duly concerned with “forced vaccinations” courtesy of demented, power-hungry, “reduce the global population to 900 million people carrying capacity”  Bill Gates and other such “lovely” people (e.g., Soros), who are pushing this Orwellian enterprise together with the government bureaucrats from Dr. Fauci’s CDC on down, how can Roberts possibly invest yet more trust into the type of tenured, sheltered, un-elected, un-representative, overpaid, power-hungry bureaucratic statists that are in bed with Wall Street and K Street kleptocrats  pushing cronyism/fascism?  BTW, members of this same “fine,” “fourth estate,” utterly unconstitutional bureaucracy have facilitated record student debt, record professor compensation packages and perks, “Rome, revisited” like college campus expansions, and destructive indoctrination instead of education.  How can Roberts trust them or willingly EMPOWER such “technocrats” to “do the right thing” when it comes to a “debt jubilee” or any other totalitarian enterprise they engage in?  And this from the “father” of supply-side economics?  Wow, wow, wow!

How about trying revisiting the Constitution, from A to Z, instead, Dr. Roberts, and you’ll get your supply back and your jobs back and your wealth back, brick by brick, which will likely take the better part of a generation.  And the only way to (re)start everyone’s engines is to open back up for business NOW!  Since when has an influenza with an average death rate, when measuring the broad population, EVER given the authorities the despotic power to shut down most of the country – talk about the ultimate hollowing out of the 5th Amendment’s Takings Clause protections! (Never mind what this has done to civil liberties such as the 1st and 4th Amendment rights, i.e., the freedom to assemble and to privacy protections!)

In short, we have to revisit sanity, what works, and the real world.  But please, Dr. Supply Side, do not advocate doing it through even more central planning.  Let us not double down on the road to serfdom.  We don’t need to go from bad to worse.  To a full-fledged Banana Republic or to “Back in the USSR!”  Good grief, who’d have ever thought … that the only viable allocation response was to include the ultimate insurance against such totalitarian policies, namely physical precious metals inclusion?

Ironically, and most sadly and destructively, the globally debilitating Corona virus “shutdown” response is hastening the day when confidence in counterfeit currency policy is overwhelmed by its insidious and metastasizing progeny, namely gaping deficits, unparalleled debt, unequaled malinvestments/misallocations, plummeting productivity growth which new “virus regs” will only worsen, increasingly maligned and eviscerated Main Street property right protections, and now millions of weekly pink slips unlike anything ever seen before.  In plain English: with 22m Americans filing for unemployment insurance, or some 12% of the civilian labor force within one month; with record small business closings on the horizon; with supply lines drying up; and with an existential crisis threatening ever more people, the politicians, the bureaucrats, and the above the law “1%” continue to remain lavishly employed and compensated like never before in history.

In all, this threatens the very “system collapse” that Dr. Roberts correctly predicts, in my view, be it socially, politically, financially, or economically (they are all tied at the hip).  Unfortunately, doubling down on yet more unsound money-enabled statism/cronyism while restricting commerce, which is what our collective “Corona virus” policy response has been and will likely continue to be, especially given the November election drawing closer, will only expedite and significantly worsen our “day of reckoning.”  Why?  Because our toxic policy determined by increasingly unconstitutional “authorities” will fail to allow for the very “system clearing reset” (also known as Creative Destruction) to occur that would set the stage for a return to the rule of law, to free market incentives, to property right protections for Main Street makers, to productivity, and thus to “supply side” growth. With a self-enriching, moral hazard-inducing, pork barrel-addicted, fiat money-enabled government refusing to get out of the way, unequaled “double jeopardy” is on offer, which is most worryingly being worsened by soaring approval ratings garnered by totalitarian governors shutting down their states on the one hand, and demanding federal taxpayer rescues on the other hand — “federalism” financed by “the Feds!”   Call it a one-two knockout punch of economic shutdowns worsened with yet more counterfeit currency creation and ever more pronounced statism (socialism). 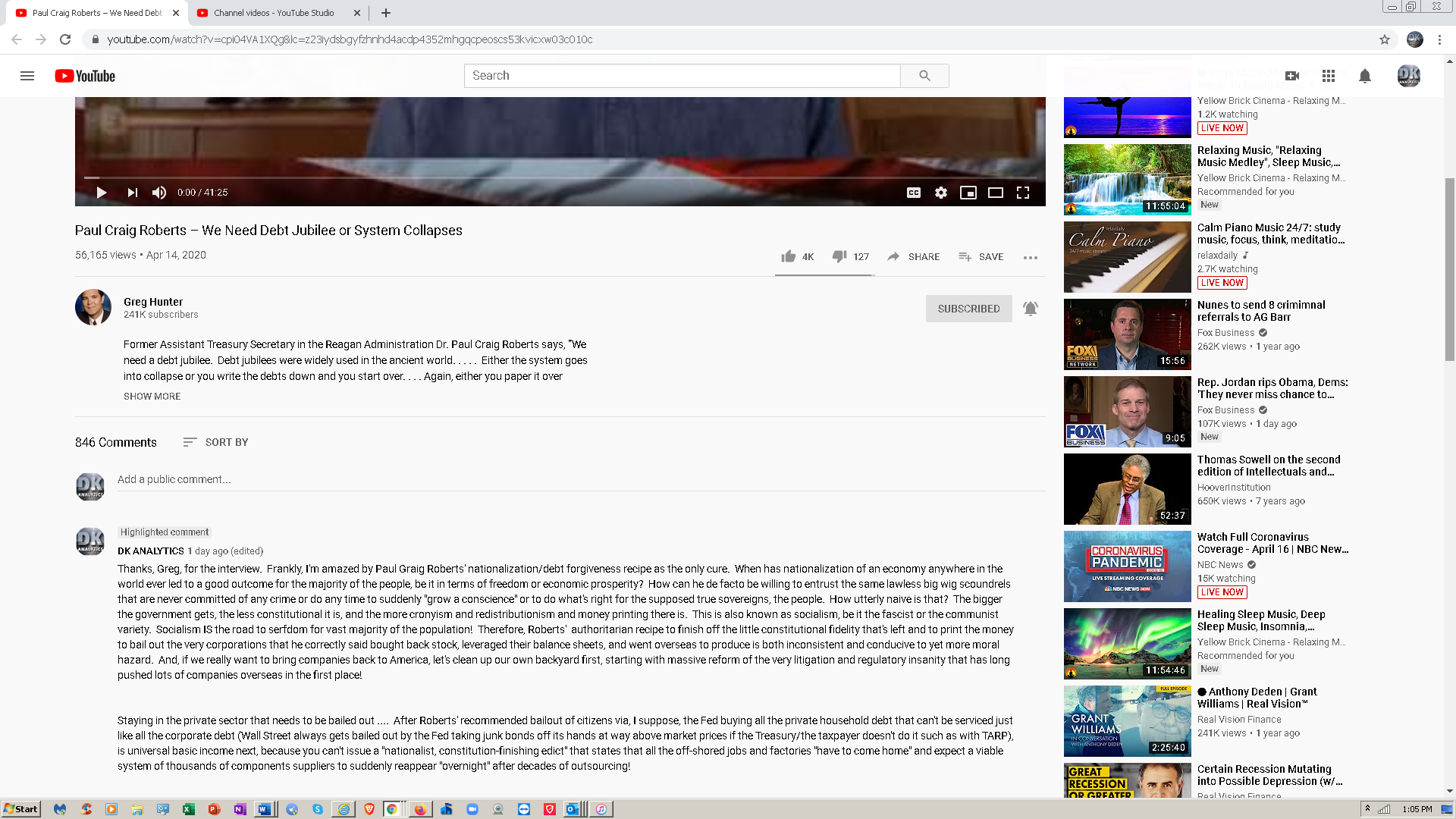 FYI: links were added after the initial publication date in order to provide the reader with articles that expounded on various assertions (money printing, cronyism, infection rate, etc.) that I have made in this post.  Same holds true for select content extensions, very much including the closing paragraph, which will hopefully better underpin why we are most unfortunately on “the road to serfdom.”  Therefore, this post “stretches” my initial comments made on Greg Hunter’s youtube channel.