Post #78: We the sheeple or we the people?  The depraved, tyrannical left gets to go maskless, yet Swissair calls the cops and they arrest four passengers refusing to mask up

The tyranny of the minority over the majority.  There are two sets of laws.  One for “we the plebes.”  Another one for the activist, leftist mob (mobocracy), and of course one for our leftist politicians, bureaucrats, and big, fascistic corporations,  all of whom have been caught hobnobbing, without masks, with other leftist elites at expensive, exclusive events from just outside San Francisco to Martha’s Vineyard.  (Of course the “little people” service personnel that wined and dined them had to mask up!)

The key enabling agent for two sets of laws: we the sheeple!  We outnumber the leftist mob by well over 100:1, and the tyrants in power by about 100:1.  Yet we typically accept, or stand idly by, as factions, from BLM to Antifa to the LGBTQ (or whatever) crowd, flaunt the very decrees and laws that we abide by “or else,” while we allow those in power to strip us of our freedom and our property rights.  How does one spell disgusting?!

Check out a very recent case in point here in Switzerland, namely the Zurich “Pride” festival, which took place during the September 4th weekend:
https://www.myswitzerland.com/en-us/experiences/events/zurich-pride-festival/   (Please note: the page was taken down; it showed, via various links, thousands of unmasked “pride festival” particpants!  Can’t have that.  See below)
https://duckduckgo.com/?q=pictures+of+september+4th+2021+zurich+pride+parade+festival&t=chromentp&atb=v284-1&iar=images&iax=images&ia=images&iai=https%3A%2F%2Fstatic.az-cdn.ch%2F__ip%2FEka9wpQunyshVxEPGapXTbjvK0E%2F7a4b59c841a881a100e3af048eec32cc08fe928a%2Fn-large2x-16×9-far

It’s okay if thousands of lesbians, gays, bisexuals, transsexuals, and other “lovelies,” who collectively represent less than one percent of the population, make their demands known to the other 99% of the citizenry via large, mainly unmasked public gatherings (festivals), which the “authorities” de facto approve.  But, if four people refuse to mask up in a Swiss Air aircraft prior to departure, they get escorted off the plane and are then arrested (the link is in German; perhaps you can put Google to some good translation use for a change, i.e., if they are more honest here than elsewhere?).

You just can’t make this stuff up.  The double standard is so outrageous.  Yet the broad-based lack of civil courage to stand tall for sanity and freedom is even more outrageous, and despotism enabling! 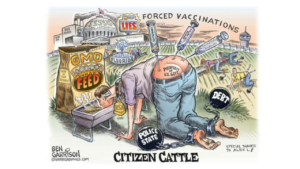 When, oh when, are constitutional law-abiding citizens going to assert their inalienable rights by taking their masks off in such numbers that our despotic Coronacrats are utterly overwhelmed?  That is all that it will take to end this nightmare, together with other profound lawlessness, including forced “vaccinations,” vax passports, and arbitrary small business or church closings.

We are so close, yet so far.  Can enough of us find the civil courage in time to regain our inalienable rights before it is checkmate, or will we continue to allow tyranny and evil by the elite minority to metastasize to the point of no return?  Will we continue to condone the same elites that don’t live by the rules they whimsically, unconstitutionally, and devastatingly impose on us while they look askance when a favored faction of theirs disregards those rules in broad daylight?

The great thing is that it is still up to us.  The bad thing is that we are unlikely to step up while we still can.  Prep, and allocate accordingly.  For tips on the latter, refer to Article 1, Section 10, clause 1.

The obligatory boilerplate:
This commentary is not intended as investment advice or as an investment recommendation. Past performance is not a guarantee of future results. Price and yield are subject to daily change and as of the specified date. Information provided is solely the opinion of the author at the time of writing.  Nothing in the commentary should be construed as a solicitation to buy or sell securities. Information provided has been prepared from sources deemed to be reliable but is not a complete summary or statement of all available data necessary for making an investment decision.  Liquid securities can fall in value.